If you are a fan of light user interfaces, then you have a reason to party. Windows 10 is getting a sparkling new light theme with the next major update.

This new design was officially unveiled by the company on Wednesday, November 14, in a new preview version for testers. Build 18282 surprised everyone with this clean and sleek new design, giving the three-year-old operating system a fresh new coat of paint.

It is the perfect antidote to the dark styled themes that seems to be all the rage these days. 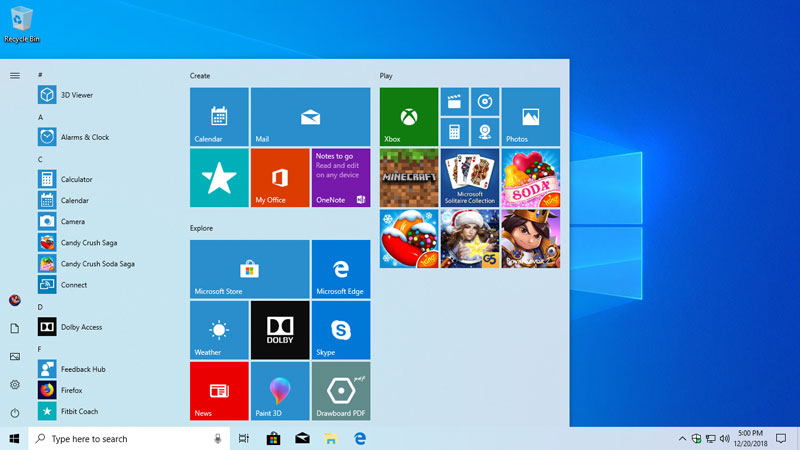 The Light side, and the Dark

Star Wars references aside, this was one of the most requested features in Windows 10. More so by users that did not care all that much for the dark layout. If you find yourself in that camp, then this new light theme should be right up your alley.

In fact, even the dark style took its sweet time coming.

Fans had been clamoring for a black style in Windows for what seemed like eons. It went to the level where Windows 10 Black Edition had its unofficial and underground release. The public demand began well before the days of Windows 8, with users asking Microsoft to focus on modernizing the user interface of its OS.

Took the company the better part of the decade to get around to it, and Microsoft debuted that dark new look in stages, first across the main UI of the OS and then, earlier this year, for File Explorer and the remaining elements.

All things considered, the new Dark theme in Windows 10 has been a certified hit with users — particularly those select few with OLED displays, as well as people who stare at their screens for long periods every day.

Now that they have got their wish, things are swinging in the opposite direction.

Let there be light!

Even though this new theme is still in development, and at an early design stage, it still looks stunning and very polished. The company has even bundled in a new light default wallpaper, which really contrasts well with the light theme design.

One thing you may be wondering is isn’t Windows 10 light enough with its default look? Well, not quite. When switching the Dark mode off, the OS does default to light-colored menu and background elements, but it still comes with a frosted-black Taskbar and Start Menu — not exactly the definition of consistency now, is it?

“Ever since we introduced the ability to choose between light and dark in Windows 10, we’ve heard feedback asking for a truer separation between the two options. … Now, all system UI will now be light. This includes the taskbar, Start menu, Action Center, touch keyboard, and more.”

We’ll take a look at this highly anticipated facelift in detail below, but let’s check out how the desktop looks with this light theme applied. As you can see above, it is every bit as modern as some of the other implementation available on competing platforms like macOS.

We have also included a small gallery of screenshots that shows how the various areas of the OS now look with this Light theme applied.

And to top it all off, here is new default wallpaper that Microsoft has included with this theme. It is an iteration of the default Windows 10 background. You can download multiple high-resolution versions of it to grace your desktop, from standard 1080p and 4K to ultrawide and device specific variants.

Download them from the links below, or as a ZIP file here.

Now, obviously, this new light theme is still a work in progress and Microsoft is awaiting feedback on the experience from Insiders to further tweak it. Goes without saying, elements might be revised between now and final release — the OneDrive icon and other elements of the system tray are subject to more design changes in the coming months.

First things first. Although it is nowhere near finished, this early implementation of the Light theme is off to a great start. It not only themes your apps, but also the Windows Shell, including the Start Menu, Taskbar, Action Center, notifications, touch keyboard, even some context menus.

All this is important to give this light theme a more consistent feel, which is something that has been missing from the Windows 10 user interface, truth be told.

That said, here are some observations that we have noticed in this initial release:

Overall, the first version of the Light theme for Windows 10 is pretty great.

It’s a clean, fresh take on the UI that many users are going to take to and enjoy. The minor issues are par for the course for a pre-release feature. The bigger concern is getting third-party developers to update the icons for their apps and programs.

Again, that is something that will fall into place in due time.

When will the Windows 10 Light theme be available?

So, when will you be able to give your system this new look? Microsoft, apparently, has been developing the Light theme for a while now, and is currently testing it out with people that are enrolled in the Windows Insider Program.

The Light theme is set to debut with the next major update to Windows 10, currently codenamed 19H1.

Since Microsoft usually releases these updates twice a year, in October and April, this new look should become official in spring — unless the company runs into some issues and is forced to remove or delay it. Like it has some other beta and experimental features, Sets being the most notable example.

But if all goes according to plan, this coming April will be the dawn of a new era for Windows 10.

A bright new era for its user interface.

2 thoughts on “Windows 10 Light Theme: What is it and How is it Useful?”