Have you ever wondered if you could use two mice on a single PC? No, you are not the only odd duck out there! There are plenty of scenarios where another set of keyboard or mouse seems quite handy like – using another wireless mouse from a distance while watching a movie.

The idea sounds cool, right? Or while playing games like FIFA, you could use another keyboard for your mate to have a marathon gaming session.

I could go on for hours about how it can make the best of the situations. So, folks, here are some of the ways to use multiple keyboards or mice on your computer, enjoy!

Method #1 – Simple Solution: Connect Them Both

If you have never tried this before now’s your chance, You know, Windows can detect multiple keyboards or mice and even lets you use them without a problem. All you need to do is plug it in, all done.

Windows will take a few moments to add its driver but once it settles in you can efficiently use the two mouse on one computer without any problem at all.

Same goes for keyboards. After plugging it in, you’ll be able to type using both of them without any hassle, pretty cool.

This usually works best if you want to use it for your TV. You can easily mirror your PC to your TV and then control it with a wireless mouse. Both the devices will work the same way. So, you can keep switching back and forth, just as you like.

Well, the simple solution is excellent, but it only gives you control over one cursor. What if you want to use two separate cursors at a time? This tool is the answer to that.

Using two separate cursors using TeamPlayer is easy. It will get the job done in a jiffy. All you have to do is to download it from the website and install it. 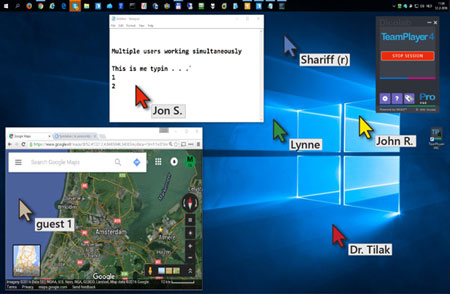 Although you’ll get a trial version, it’s not free of course. But it will be useful if you only need it for a short time. Or you could buy it if you need it in the long run.

After you install it, you have to click the trial tab and then hit the Start Trial option to start it.

A small window will appear which would control the app. You’ll be able to add a red box to your screen using the right screen like button. This red box can restrict the other mouse’s movement.

So, if you don’t want the other person using the mouse to use more than one app, you can use this feature. But you can also disable this feature by clicking that button again. It will allow the other mouse to have full access to the screen.

How To Use TeamPlayer?

It may be a little bit different than other tools. After you start to use it, it will begin to split the device inputs. The first mouse connected to it works as User 1 and then User 2 and so on.

The same goes for keyboards. Once you connect them, you can use them simultaneously. So, one can type a document, and other can surf the net. It’s effortless.

If you want to tweak it further up, you can head to Settings. It will allow you to change the cursor colour, size or labels. You can even alter the speed individually, just to distinguish them. Also, you can use the shortcut tab to start or stop the multi-keyboard mode.

You can even change your name from User 1 to whatever you want.

Although it looks pretty impressive, it costs a great deal. So, unless you are a businessman, I wouldn’t recommend using this solution.

All the mice and keyboards of Logitech now comes with a Unifying Receiver. You can plug in it into a USB and connect other devices. You can use it to connect up to 6 devices! But they have to be all Logitech of course.

So, if you have multiple keyboards and mice of Logitech, you can use it all at once without another software.

You need to have Logitech Unifying Software on your system. If you don’t have it yet, just install one and you’ll be able to use this method.

The software will lead you to how you can add multiple devices or switch them on and off.

TeamViewer is another way of creating two cursors on one screen. TeamViewer is a great way to make powerful remote connections, but you can use it to add a second mouse too!

The only drawback is that you need another PC to serve as the mouse. You need to download and install it on both the computers. After setup, you can add the second PC to the host using the ID number and passcode from the first computer. 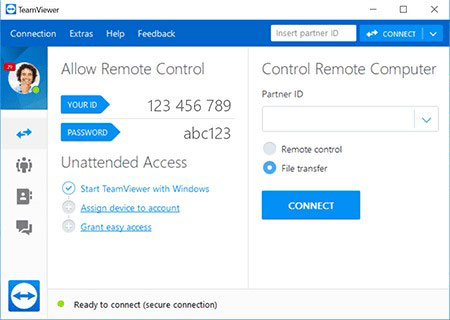 Voila, you have two cursors now. Now you can control the PC using both the computers. But your second PC’s cursor might be hidden by default.

Enable it by going to, Options > Remote control and check the box to Show your partner’s cursor on both machines. This way you’ll be able to see both the cursors.

Though it won’t let you perform independently as TeamPlayer, you can use it to make other people control cursors on the same screen. It can be useful if you want to share or review a document and have something to show each other.

You need a fast internet connection to work without any lags though.

What do you need them for?

Typically, people don’t need to use two mice and keyboards at once. But if you still have to do it Windows default option is enough. It works great with home media setups.

You can always add on-screen keyboards and mouse tools for a change.