For those who want to record videos or games on their Windows 10, it’s now easier to achieve this given the numerous tools that are available.  Whether you want to record a game you are playing on YouTube or the latest project you are undertaking Windows 10 offers you a couple of ways to go about it.

While most computers’ architecture has microphones and webcams for recording, it’s not always easier to record your screen directly. You’ll require some technical know-how or knowledge and maybe software to complete the task. After all, it can be a daunting task to make a lesson film, stream a game or make a tutorial if you are unable to record your screen.

Windows 10 feature comes with a built-in screen recorder that you can use without installing third-party software. However, it’s only available for users with Intel Quick Sync H.260 graphic card (2011 and later models), Nvidia NVENC or AMD VCE and higher models’ graphic cards. So, if you don’t have the latest hardware, then upgrade your computer. But if you do, follow the instructions below to launch the screen record.

Step 2:  Click on the capture icon as shown below.

Step 3:  On the next screen, tick the red button to start and stop the recording.

After completing the recording, the file will be saved in MP4 format in the location Videos/Captures folder. If you want additional resources for using the Game bar menu, you can find them on YouTube.

How to Screencast in Windows 10 using Inbuilt Recorder

Microsoft PowerPoint usually comes as an office tool. If you have Microsoft PowerPoint then you can create screencasts with it. the program usually embeds the screen recording in form of a slide but you can also save it as a screenshot. To record your screen with PowerPoint, follow the steps below:

Step 2: Click the  Insert Tab and select the Screen Recording option at the right side of the Insert menu 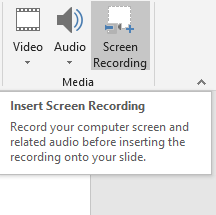 Select the part of the screen you want to record using the “Select Area” tool. For office 2016 and later versions users, you can press Windows+ Shift+ A. Use the PowerPoint tools to mark the screen recording area.

In case your phone cannot run the in-built screen recorder, then you can use third-party software to record your screen. Reliable software includes OBS studio that is a dedicated screen recording software. Besides, it’s open-source and doesn’t limit the content that you record on the screen. It does not contain the boring watermarks that are coming with free apps.

OBS studio is one of the most advanced screen recorders on the market. It is open-source and provides no limit on the duration of recording a video.it also contains tons of editing features plus a built-in streaming function that makes it ideal for those with a larger live audience while recording. It also features greater hardware support and a 60fps recording feature that makes it a #1 tool for recording the screen.

OBS Studio has many features which makes it a little technical to set your personal preference. Regardless, it remains the best screen recording software on the market.

For those looking for a premium screen recorder software, Snagit is the best match. Though designed for start-ups, it has a myriad of recording features for making your videos and marketing them. You’ll also find guides on how-to-do particular tasks, vlogs and more.

So, if you are planning to create a video that has multiple videos and graphical sets and screen recording, then its best to buy Snagit software. It’s also best for beginners as it has a set of easy-to-use tools. Snagit costs $50 and it’s a great option for those looking for a premium screen recorder.

Recording your screen is easier in Windows 10 if you have the right tools. With in-built and third-party software, you’ll hardly lack the best tool to record your game, presentation and more.

Hey, this is Margaret, a Windows Systems Administrator who’s in love with everything about tech.

1 thought on “How to Record Screen on Windows 10”