Updates are updates. Or at least, they used to be. Back in the good old days of Windows 7, an update for the operating system was simple to understand, simpler to install. However, the rising complexity that a modern OS entails means that Microsoft had to evolve.

The company now provides two types of updates for Windows 10 — feature updates and quality updates, as they are called. This is part of the new servicing model that the software titan has dubbed Windows as a Service.

In this article, we’ll learn more about how exactly these two types of updates differ, and all you need to know about them in order to get a better understanding of the updates that you deploy on your Windows 10 system.

But first, a little introduction to the Windows as a Service model.

Windows is now a Service

Microsoft had a whirlwind of a time not long after the launch of Windows 8. Users were taken aback with the wholesale changes the modern new OS introduced, the included apps, even how the operating system was updated. Microsoft haphazardly followed it with Windows 8.1, which brought along its own set of complexities along with improvements.

It was clear that the olden days were behind us, where a new version of Windows hit store shelves every three years. Instead, this was a time of rapid updates and quick arrival of new features.

This led to the company changing its strategy and introducing a new servicing model — one that it conveniently dubbed Windows as a Service (WaaS). You can learn the full technical details of WaaS in this support article from Microsoft.

But it simply means that users got incremental updates regularly that would not only add new features but also streamline how their devices are kept up-to-date in today’s fast-paced digital world.

With this change, Microsoft also altered how its operating systems were delivered and how they were updated. Both Windows 10 and Windows Server 2016 moved away from the large number of separate patches each month to a cadence where two main types of updates are now made available for these operating platforms throughout a year.

Let’s find out what they are.

Before we get down to what updates are, let’s first focus on hotfixes. A hotfix is created when Microsoft wants to address a specific issue, problem or customer scenario for its products, including the Windows operating system.

A hotfix can address either a single issue or range of issues. The company fortunately publishes a corresponding Knowledge Base (KB) article for every hotfix it releases. And this documentation indicates what code, files, or functions are changed by a particular hotfix.

This brings us to updates, which are basically comprised of hotfixes that Microsoft has developed.

In this case, a Cumulative Update (CU) is an update that contains all the previous hotfixes to date. Also known as quality updates, these are mandatory updates that your device downloads and installs automatically every month via Windows Update. They are usually rolled out every second Tuesday of each month — also known as Patch Tuesday. But you may also occasionally see out-of-band releases that are distributed outside the monthly schedule.

Cumulative Update
A cumulative update is simply an update that contains all previous hotfixes for a software to date. Think of it as a maintenance rollup for Windows and other Microsoft products that the company releases almost every month.

In Windows Update, quality updates can appear either as Cumulative update, Security update, or Update for Windows 10. In all three cases, these are quality updates.

You can keep up to date with the cumulative updates that have been released for your version of Windows 10 via the Microsoft Update Catalog website. It lists all the updates and security patches released for your operating system, along with their details, sizes, and links for manual download.

The idea behind cumulative updates is to bundle together all patches and updates into one release for a particular version of Windows 10. These updates are meant to fix bugs and errors, patch security vulnerabilities and improve reliability of Windows 10. Instead of individual releases, these updates are all packed into one bundle and made available for download.

In other words, cumulative updates do not bring along features, visual changes or even significant improvements to Window 10 — they are simply maintenance updates.

Naturally, their nature being cumulative, they also increase in size each month. That’s because they include all the changes available in previous updates.

This is one of the drawbacks of this cumulative approach — the updates are large.

Microsoft has tried to address this issue by bringing forth different models of delivery. This it has done via what it calls Full updates, Express updates and Delta updates. Delta updates are no longer in play nowadays, with the focusing having shifted to Express updates. These are not only the smallest in size, but get smaller the more up-to-date a device is.

When a new feature update is released for Windows 10, the first cumulative update is generally between 100 to 200 MB in size, but it can quickly grow up to 1GB. Delta updates, meanwhile, are typically anywhere from 300 to 500 MB, while Express updates can be as lightweight as 150 to 200 MB. 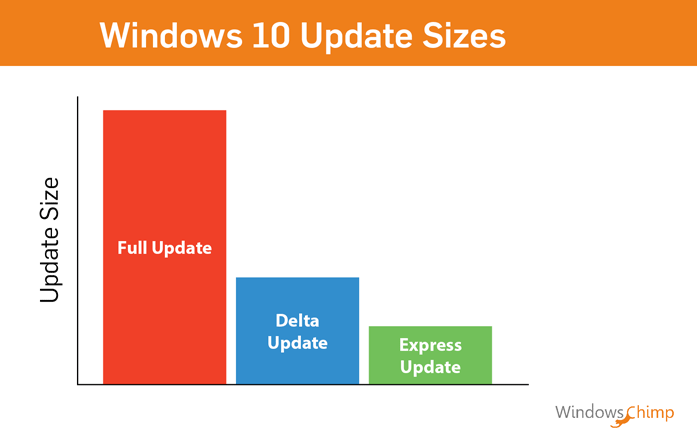 Ultimately, cumulative updates trim down the number of updates you need to download on your device, while also reducing the number of problems on your system — theoretically, at least. Plus, since these are smaller packages than full-fledged features updates, they also tend to download and install faster.

Microsoft allows Windows 10 Home and Pro users to delay the quality updates for up to 7 and 35 days respectively. Home users were allowed this luxury only recently, though, as previously users running this version of the operating system were forced to install cumulative updates as soon as they became available.

That said, you can only pause these updates once. And when they resume, the latest quality update must be installed on your computer before you can pause them again.

Technically, feature updates are new versions of Windows 10. Microsoft makes them available twice a year, during spring and fall. This semiannual release cycle is how the company keeps its OS fresh with new features, while giving the Windows development team time to compile and test them.

Teams at Redmond use telemetry data and feedback, both from internal testing and what is provided by the participants enrolled in the Windows Insider Program, to prepare these new versions.

Once an update is proven to be reliable, the rollout begins.

First to consumers and then to business customers.

You are able to acquire these major updates via Windows Update, or as a manual install. ISO files are also provided to users that want to do a clean install on their systems. Typically, first to IT pros that are subscribed to the Microsoft Developer Network (MSDN), then to Windows Insiders, and finally, as the compatibility issues are ironed out, to general users. Microsoft also sends out final RTM copies to hardware manufacturers to deploy these updates on their devices that launch in the months following the release and rollout of a feature update. This is how the laptops, tablets and PCs that you buy automatically come with the latest version of the operating system.

RTM, in this case standing for Release to Manufacturing — a build that Microsoft finalizes after testing and assessing for complete compatibility with a wide array of hardware and software. These build numbers denote the updated versions that the Windows team compiles every few days during development of these major feature updates.

Feature Updates
A feature update is a major refresh of Windows 10, packing in new features and improvements for the operating system. Technically, a feature update is a new version of the OS that Microsoft typically releases twice a year, roughly every six months.

As the name gives away, a Feature Update (FU) typically includes new features, visual improvements and performance enhancements. In other words, changes that improve the overall usage experience of the operating system.

However, unlike previous servicing models, feature updates nowadays include a smaller list of changes. This helps reduce compatibility issues with apps, while also lowering the learning curve for users. Case in point, the jump from Windows XP to Windows Vista not only broke down drivers and software compatibility in the new version, but also complicated matters for users that were taken aback by the new UI.

That no longer happens now. 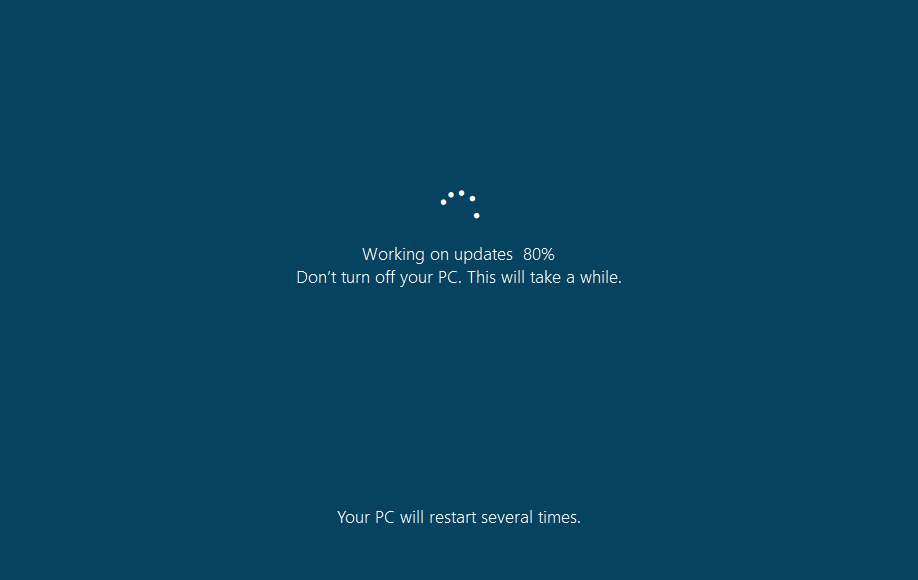 What does happen is that when you install a feature update, you are actually installing a new version of Windows 10. Meaning, not only is a complete installation is required, it also takes longer to apply. And when compared to installing a quality update, you are more likely to run into problems.

In terms of sizes, feature updates are much bigger than quality updates. Download sizes can range anywhere from 2GB for the 32-bit variants to 3GB for the 64-bit versions, and even 4GB if you use an installation media — these are new versions of Windows 10, after all.

That said, Microsoft has been working to reduce both the file sizes and installation times of feature updates. A new update mechanism that went into place starting with the Fall Creators Update only downloads the files that have changed. This helps make the download packages around 35% smaller.

Additionally, the company provides users with a little more freedom and choice regarding when they want to install feature updates for Windows 10. 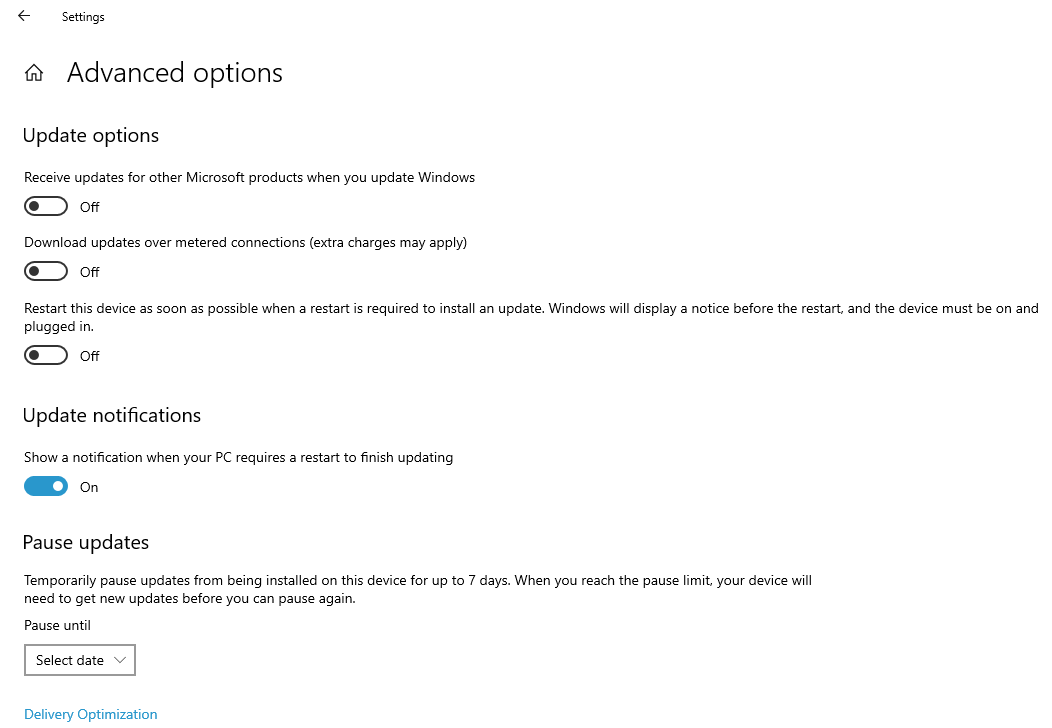 Those of you that are running Windows 10 Pro can defer feature updates for up to 18 months after their original release. Your device will continue to receive the cumulative and quality updates, but newer versions of the OS will not be installed. Windows 10 October Update actually bumped up this window for Windows 10 Enterprise and Education editions to a wholesome 30 months.

Goes without saying that if you prevent your computer from installing these updates, you must upgrade your PCs to a supported version of Windows 10 at the end of the update cycle if you want to continue getting security patches and other regular updates.

By now, you should have a detailed idea of the variances between the two types of updates Microsoft releases for Windows 10. We have further distilled down this information in a table for you to quickly take note of the key differences between cumulative and feature updates for the operating system.

Give it a scan below:

Microsoft continues to evolve the servicing model of not just its operating systems but also the various software products that it develops. This simplified approach of dividing Windows 10 updates into quality and feature releases is the best way forward in today’s increasingly complex technology landscape.

Understanding the main differences between the type of updates Microsoft releases for Windows 10 is essential if you want to know what you are deploying on your PC. The software titan has done a good job with this distinction as it transitions to the Windows as a Service model.

Still the approach continues to evolve.

Not to mention the fact that Windows 10 updates occasionally stir up trouble during and after installation, leading to issues on some devices. Microsoft is trying its best to minimize these issues. But knowing what and when to install is almost as important as keeping your devices up to date these days.

2 thoughts on “Difference Between Windows 10 Cumulative and Feature Updates”