The latest updates on Windows 10 equips the task manager with the ability to track the Graphics Processing Unit (GPU) and display its utilization.

It means that all the components of the GPU on your computer can be visible on the “Performance” tab showing real-time resource usage. Through the “Processes” tab, you can see the active process using the graphics processor and the video memory analytics is visible in “Details” tab.

This article will guide you through the process of checking GPU usage in Windows 10 from the task manager. The Operating System uses features to pull down this data from the GPU Video Scheduler (VidSCH) and the video manager (VidMm).

Find Out How Much vRAM Do You Have and Need?

All these are visible on the Windows Display Driver Model (WDDM) kernel, which defines resource allocation. All data shown via the kernel are accurate regardless of the API used to access the GPU such as the OpenGL, DirectX, NVIDIA, AMD Mantle, OpenCL, etc. failure to invoke the GPU data on your PC means you could be using an old driver version.

How to check if GPU information will be displayed

On Windows 10, you can retrieve  GPU information from the task manager using the Windows Display Driver Model which is a unique driver architecture that video cards must support to be able to render desktop and apps on the screen.

To confirm which Windows Display Driver Model that is running on your system press the Win+R  to launch the run dialog box. Run “dxdiag” to open the DirectX Diagnostic Tool as shown below.

The display driver should be WDDM 2.0 or later as shown for GPU usage information to be displayed.

How to check GPU usage information

GPU information can be viewed by accessing the Task Manager. You can view overall GPU usage or GPU usage per process.

“GPU Engine” option can also be enabled to show which CPU engine is using it.

The total GPU usage of applications is displayed at the top of the GPU column. You can sort out which apps are using more of the GPU resources. The number on the GPU column shows the highest usage across all engines.

How to Check Game’s FPS in Windows 10

The overall GPU resource usage statistics are visible after clicking the “Performance” tab, and then under the “GPU” option on the sidebar, you will see the results. PCs with multiple GPUs will show statistics for the two. 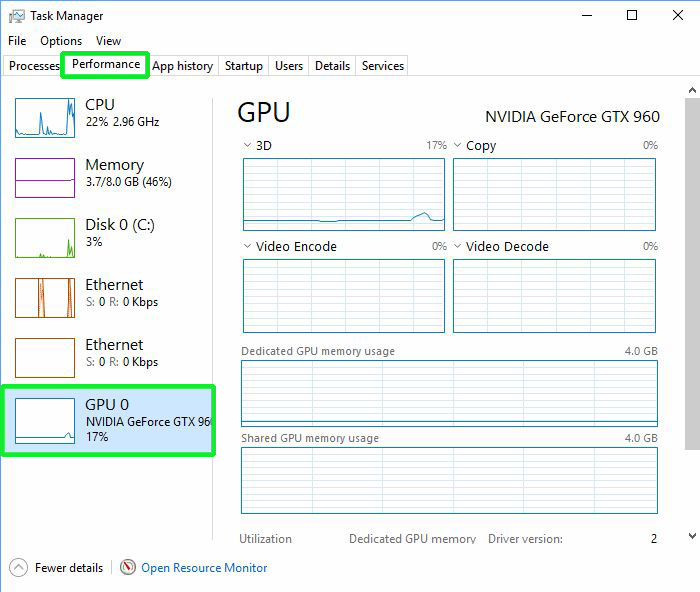 If your machine is using linked CPUs, they will be identified with link numbers as “Link #.”

What you see on the figure above is real-time GPU usage. By default, the Task Manager will attempt to display the most active engines at that time. The graph diagrams will vary depending on the type of application that is currently running. The engines on the sidebar will show you different graph patterns.

The same window can be used to monitor graphs for dedicated and shared GPU memory usage. The date shown for dedicated GPU indicated to how much of the GPUs dedicated memory is in use. Systems using a discrete GPU, the details indicate the RAM usage, and for the integrated graphics systems, it shows how much system memory reserve that is in use.

Shared GPU memory usage refers to how much of the system memory is used for GPU tasks. This portion of memory is dedicated to standard system tasks or video tasks.
It is also possible to view a single engine view to see only a single graph instead of the listed ones. You can control the viewing of this window by clicking on “Options” and select “Always on top”. Double-clicking on the window pane showing the graph will change the view to minimal which you can position anywhere you want on the screen.

The Task Manager is supposed to give users accurate data on GPU performance and usage. Knowing how applications respond when in use help System Administrators in planning when considering system upgrades.