We all know that our computers can be easily compromised and hacked in many ways. This could be done with the help of various malware (malicious software programs) that could easily get into our computers. In that note, the Rootkit is one of the affairs, which is designed to access the entire network system. By the very name, there exists some confusions between the terms Virus, Spyware, Worm, Trojans, etc. and Rootkit.

Actually, all these still come under the sector of malware; with each one having its own specific functions and mode of operations. Well, in the context of malware, the Rootkit is a part, which assists in a cyber miscreant. It also further maintains access to the infected PC. To the core, Rootkit is one of the unpleasant malware, as none will ever want to get hit by it, in the first place.

In any case, if a Rootkit slips into your system, it’s really very hard to remove it. Because it’s a stealthy program that resides in the kernel of your PC. Furthermore, it is also capable of escaping from even a powerful system scan. So traditionally, people try reformatting the entire hard disc or reinstalling the OS in order to remove the Rootkit programs. Luckily, we can prevent this by using better security applications, which are usually referred to as Rootkit removers for Windows 10.

Rootkit indeed needs much-advanced techniques, for securing your PC. It includes signatures, difference-based detection, behavioral detection and integrity checking. Today, we have lots of Rootkit removers for Windows 10, available in the market. But unfortunately, many of them aren’t very advanced and also stands deficient of all the mentioned techniques. Here, we are going to share the best Rootkit removers that will help you get rid of the Rootkit applications. In addition, they also keep the machine secured from the intruders, in future.

MalwareFox is your one-stop anti-malware solution including rootkit remover. It is a lightweight program. MalwareFox does not just deal with less harmful malware like adware & browser hijacker but it also protects you from deadly rootkits. You can easily install MalwareFox without rebooting to safe mode. It comes in a small installation package which can be installed within a few minutes. 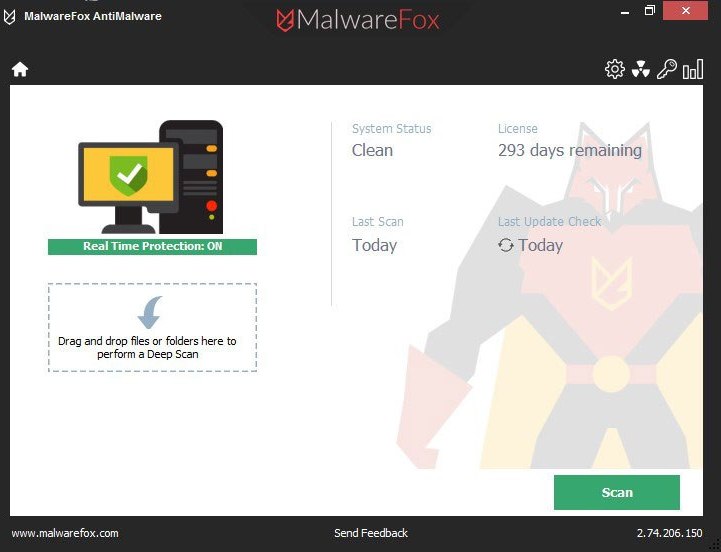 Once installed, it will update its library for deadly malware. Once you see the Real-Time Protection: On you can press the scan button. MalwareFox scan your computer deeply and it easily removes the malware including rootkit. This program also tells you the location of malware, its type, threat level, and available cleaning options like Delete, Repair, or Quarantine.

Bitdefender initially released its anti-malware, the Bitdefender Rootkit Remover back in 2013. It is used to unmask the malicious software programs from an antivirus application. By using the Bitdefender malware removal technology, the remover can deal with almost all known rootkits quickly and effectively. Interestingly, the Bitdefender can be installed quickly, without needing to reboot your PC in the safe mode. 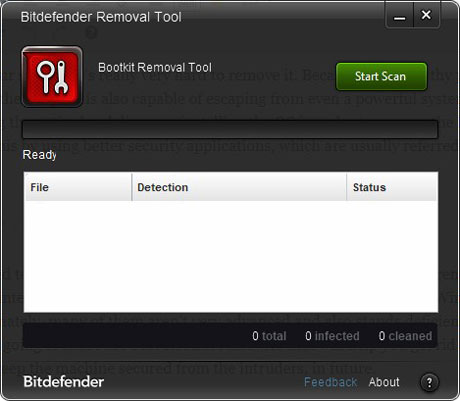 Once launched on your PC, it pops up a small window that will show the Start Scan option. By clicking on the button, the program starts commencing the scan, which takes less than 5 seconds to complete. That’s it! Once the scan is completed, the tool would have finished its task. It’ll also display a simple message, such as Malware found/ Not Found/ Reboot to clean malware, etc.

The Kaspersky Lab TDSSKiller is developed by Kaspersky Lab. It is simple to use; fast at scanning; and great in detecting rootkits. It is a free anti-rootkit tool, which can scan certain areas of your PC, such as the boot sectors; loaded modules; system memory; scan objects; and can even detect TDLFS file system or verify the digital file signatures. 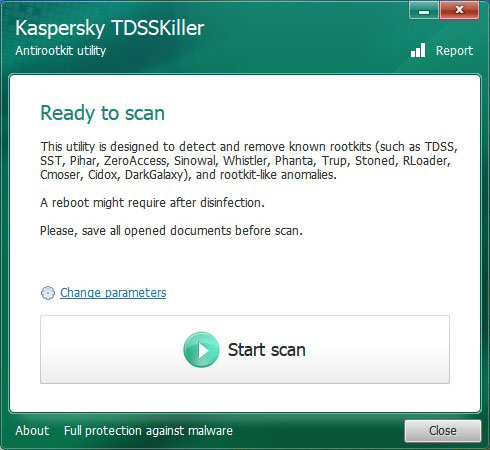 Further, it has the capability to remove all kinds of rootkits. This includes Cidox, Sinowal, Alureon, Cmoser, Phanta, Pihar, Whistler, SST, MyBios, Zhaba and Stoned. It’s a lightweight application and will scan your system in a short period of time. Moreover, it can also hide the presence of particular folders, registry keys, processes, and files.

The Sophos Anti Rootkit tool is one of the best Rootkit removers for Windows 10 that helps you to scan, detect and remove the rootkits. Further, it is a self-contained malware scanner and supports features, like user memory scanning; kernel memory scanning; scanning all connected drivers; automatic update before scanning; and rootkit scanning. 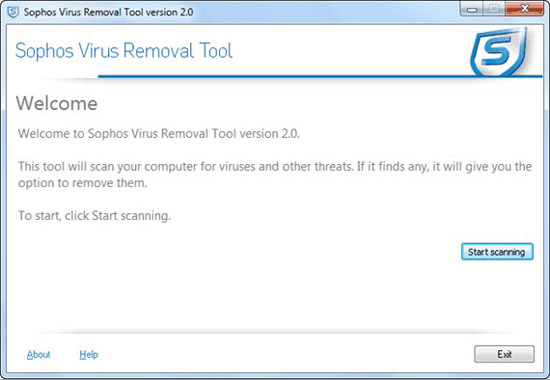 Unlike the other tools, Sophos allows you to select where it should look for the malware. It will also scan the registry and local drivers by default. Once the scan gets completed, it will display your device status. Overall, this tool will consistently scan your Windows 10 PC and lets you remain safe; reliably remove any rootkit that is presumably hidden on your system.

It is a standalone free command prompt like a tool that can be used to sense and remove multifarious rootkits and mask the malicious software. It can remove ZeroAcess, TDSS family, and Necurs rootkits. This application is authorized by the McAfee Labs and is freeware too. It supports Windows XP/Vista/7 and above, which means it can also run on Windows 10 too. 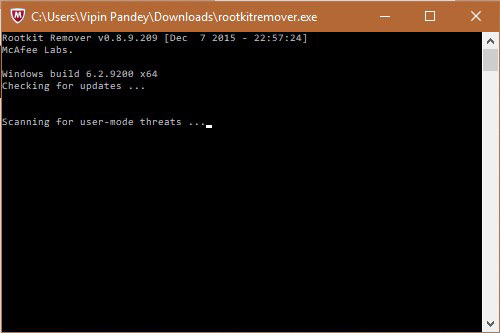 Once launched, this tool will show the stages of the scan, such as Checking for updates; Scanning; Cleaning; and Exit. In further, you will be required to reboot your system immediately, after the scan gets completed. As a piece of suggestion, it is a good idea to run the tool again after rebooting. This will check the complete health status of your PC.

GMER is another top pick on our list. It is a light Rootkit scanner that comes with a basic user interface and is bundled with heavy installation files and other functionalities. The main drawback of this tool is, caveating this software, demands a bit of knowledge to interpret the results. 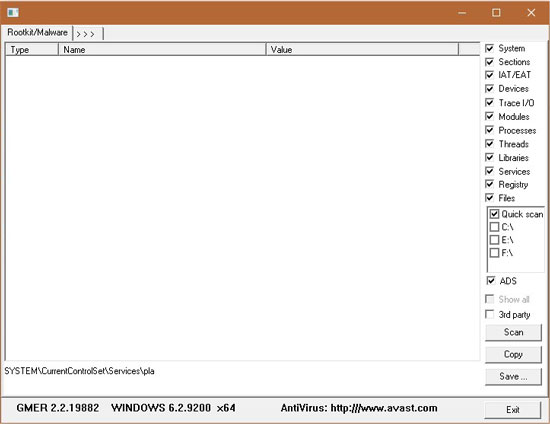 After installing this software, just run the GMER tool. The main window holds options, such as Select the threads, Libraries, Services, modules, Registry and files you’d like to scan. To kick-start, the scanning process just hit the Scan button and it will scan all the above-mentioned features in your PC. Interestingly, it’ll also have a Copy and Save option to copy the scan results to the clipboard and also lets you directly save the file in the desired text format.

The rootkit is not only nasty but is also very sneaky, and may affect your PC with a various malicious virus. The only way to get rid of this issue is, to use one of these Rootkit removers for Windows 10. Otherwise, you might have to re-install the Operating System entirely. On the whole, it’s very hard to find, which one is the best. But, in case you want to compare them, run them in your PC one at a time. It will help you acquire good strategies in the endeavor.