Got to love lists like these! German security institute AV-TEST, you may recall, performed a series of test for the best Windows 10 antivirus protection, putting several solutions through their paces.

While Windows Defender had a pretty poor showing.

And now the researchers are back, providing us with a closer look at these tests — confirming that Windows Defender (the built-in protection in the operating system) was used as a benchmark, which is to say that all other products should be able to beat this solution.

As you can see from the chart below, not every program actually managed to obtain a better score, but anyway, at least we have a reason why Windows Defender was slotted among the last in the list. 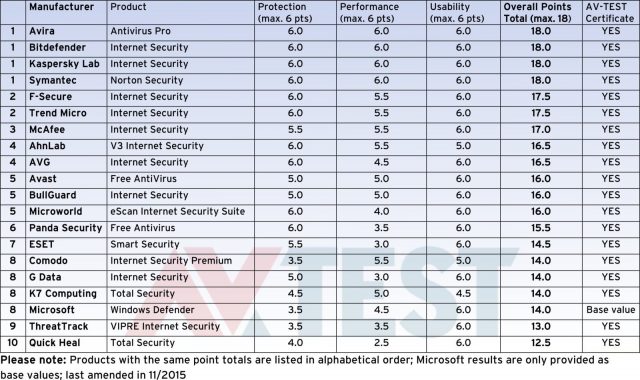 AV-TEST goes on to explain that Panda Security was able to achieve the best detection rate among freeware products:

“Panda Security scanned with detection rates of 99.4 and 99.9 percent. Windows Defender, tested for comparison, detected only 87.7 and 99.5 percent.”

However it came with a huge performance impact, slowing down the system receiving only 3.5 points, which is actually worse than the score Windows Defender managed, that is 4.5.

Almost all the tested security products obtained the maximum 6 points in usability tests:

“The result is so positive for nearly all the security packages that they received 5 to 6 points in this test. Only the product from K7 blocked a few benign programs and falsely quarantined clean files. For this, it only received 4.5 points. All the freeware programs and even Windows Defender received a good to very good rating.”

Overall, though, any of the top names mentioned above should prove to be a solid choice when it comes to protecting your computer and data.

Windows 10 may not be watertight when it comes to security, but pairing it with a quality antivirus always helps with security, and rankings like these come in handy.

Which of these programs do you use? And are you satisfied with it, paid or free? Let us know!