While we are buying a new laptop or desktop, we always seem to check the system specifications to judge the computer better. Those specs are standards such as CPU and clock speed, HDD storage space, graphics card detail, amount of RAM, etc.

Though, these specifications won’t give you a full insight of your whole system and the overall performance. But don’t worry. There are many tools available in the market to benchmark Windows 10 PCs.

So, you’ll be able to know how your system performs with every little detail.

We use these PC benchmarking software tools for applying a series of benchmark tests on a user’s PC’s hardware components like RAM, GPU, CPU, etc. After the trial the software evaluates the performance, it will give you performance scores.

You will also get comparisons with other hardware components. This data will help you to know how efficient your Windows 10 PC’s performance is.

If for some reason it’s not up to the mark you can get a hardware upgrade. Lower benchmark scores seem to be needing upgrading. So, if you are interested in measuring your PC’s performance, then you have come to the right place.

Today, I’ll be giving out the 5 best tools you can use to benchmark your Windows 10 computer’s performance. So, let’s get on with it!

Futuremark developed PCMark. It mainly focuses on all kind of Computer usage performance instead of just one particular performance.

Though there is a free version available, it’s mainly a primary tool. It includes small tests which can still evaluate a lot of performances. It comes in three editions: Free, Basic (Paid) and Advanced (Paid).

All the editions have different features and tests.

Free Version will have video playback, web browsing, image manipulation, storage benchmarks. It will also have some 3D graphics and gaming performance benchmarks. Of course, the paid versions will have more tests and better evaluation.

But the free version is not wrong at all.

But it’s a rather massive tool with a size of 2GB. So, you get ready for the big download.

Once you download the edition you want (free or paid), you need to install it. After installing run the tool. Click on the Homepage and then Run to start the benchmarking.

It would take some time to complete the full benchmark, about 15 minutes or so, give or take. PCMark will show you the progress of the system at the bottom of your screen.

While evaluating video playback and graphics, you’ll see additional windows pop up to help you with further detail. When the process completes, you’ll get to the scores of every aspect and as usual the higher the score, the better.

If you want to compare your system with other benchmarked one, then just scroll down and click on the View Online option. This option will analyze the machine and tell you if your system is better or not.

Get PCMark
5 Best Alternatives for Logic Pro on Windows 10

The next one is also a tool of Futuremark’s. This tool will give you a dedicated 3D benchmark of your PC’s gaming performances. 3DMark is undoubtedly the best one for testing your game performance, and it’s the most popular.

For most of you, the free version would be enough. But you want a more thorough evaluation then the Advanced (paid) Edition will give you the extra miles you want to take. You’ll get more tests and fancy reports along with testing your system with multiple GPUs. 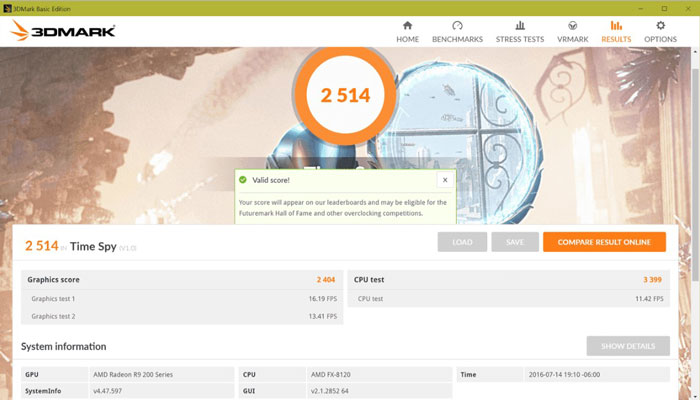 A free edition is a massive tool, weighing almost 4GB. So, be prepared before downloading this gigantic tool.

Once you download the edition you want (free or paid), you need to install it. After installing run the tool. Click on the Homepage and then Run to start the benchmarking.

It would take some time to complete the full benchmark, about 10-15 minutes or so, give or take. 3DMark will show you the progress of the system. The parameter will depend on the version of Windows 10 along with DirectX.

The default benchmark for Windows 10 PC’s are Time Spy.

It will run it in full-screen mode, and the screen isn’t interactive. Once the process completes, you’ll have a composite performance score, along with separate scores for your graphics hardware and CPU.

If you want to compare your system with other benchmarked one, then just scroll down and click on the Compare Result Online option. This option will analyze the machine and tell you if your system is better or not.

SiSoftware Sandra is another favorite benchmarking tool. It has both paid and free versions. Though the free version will be just enough, if you want more detailed and extra performance teste then you can go for the paid one.

If you want to get a well-rounded look at your Windows 10 computer, then this is probably the best tool. This software will give you separate scores and an overall score of your PC.

If you want to perform separate tests, you’ll also get distinct options for that such as virtual machine performance, processor power management, networking, memory, and storage devices. 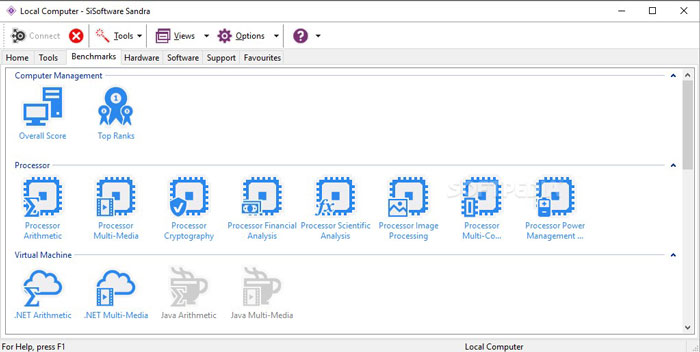 Once you download the edition you want (free or paid), you need to install it. After installing run the tool. Click on the Benchmarks tab and then Overall Score to start the benchmarking.

It would take some time to complete each benchmark, about 15-20 minutes or so, give or take. SiSoftware Sandra will show you the progress of the system once the process ends. You can also try it out for specific components.

The overall score will have scores of your CPU, GPU, memory bandwidth, and file system performance. But be sure to select the option, Refresh the results by running all benchmarks and then click OK to run the tests.

It will also give you an option to customize your ranking engines, but you have to sign up for that. If you think that it’s unnecessary, then just skip it.

If you want to compare your system with other benchmarked one, then just go to Rank tab and click on the View SiSoftware Ranker option. This option will examine the machine and tell you if your system is better or not.

Novabench is one of a kind benchmarking tool. It’s a suit with CPU, GPU, RAM, and disk speed benchmarks. This one is entirely free of cost unlike other software on the list. So, no trials or paid versions with additional features.

A better solution for you if you don’t want to pay any amount of money. 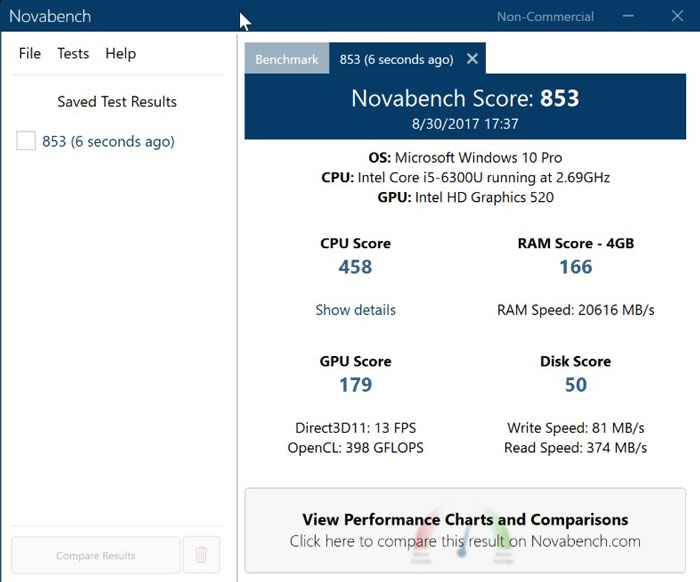 Once you download it, you need to install it. After installing run the tool. Click on the Start Benchmark Tests to start the benchmarking. The Test menu will let you choose what tests you want to run.

It would take some time to complete each benchmark, about 1 minute or so, give or take. Novabench will show you the progress of the system once the process ends. You can also try it out for specific components.

It’s super fast than the rest of them. The benchmarking process would only take a minutes or so. On the other hand, other benchmarking tools need more time to give results.

After it’s done testing, you’ll get the results in a score format. If you want to compare it to other PC’s then just click Compare These Results Online and you’ll see a comparison with other systems.

You will be able to save the results too for later evaluation. This one feature comes in quite handy.

Get NovaBench
3 Ways to Recover Serial Number in Windows 10

PassMark PerformanceTest is a benchmarking tool that will help you benchmark your desktops CPU, 2D and 3D graphics, hard disk, RAM and many more. But unlike all the others on the list, this will only benchmark desktops not laptops.

It comes with a trial and a paid version. The trial version has quite some functions that might come in handy. But the paid one will always have more tests and better result evaluation. 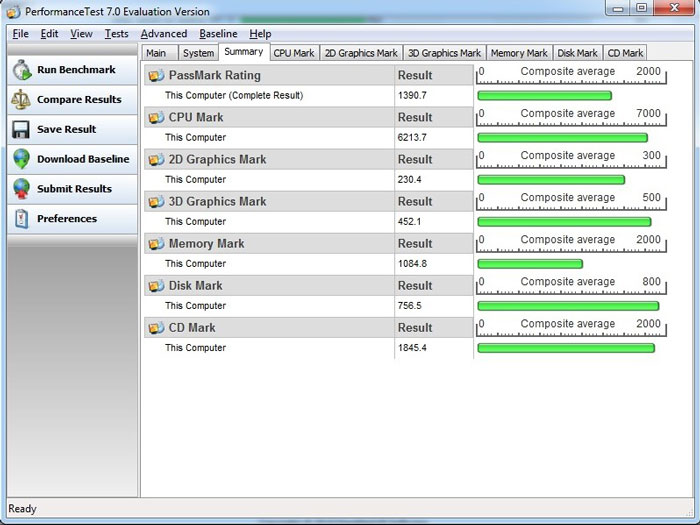 The best feature of the tool is that it has a 3D rotating motherboard model. So, you’ll be able to select the component you want to know about and run tests. The tool has 32 benchmarking tests. It changes with Windows version though.

Once you download it, you need to install it. After installing run the tool. Click on the Start Tests to start the benchmarking.

It would take some time to complete each benchmark, about 10 minutes or so, give or take. Passmark will show you the progress of the system once the process ends. You can also try it out for specific components.

Other Tools Worth Mentioning

CPU-Z will give you a complete benchmark, but mainly it’s best for benchmarking your CPU.

You will also get a score for different specifications such as the motherboard, RAM, and graphics card. You’ll be able to save a text file for later analysis.

HWMonitor will visualize the hardware components and will show you some parameters live. Those parameters or specifications are power consumption, fan speeds, utilization percentage, clock speeds, and temperature.

It’s a great way to keep an eye on your overheating problem.

Get HWMonitor
6 Ways to Fix Slow Boot in Windows 10

Piriform’s Speccy, it’s a simple benchmarking tool, most popular in the gaming community. It will perform the test and gather information about every component and even drivers for that matter.

It’s an FPS benchmarking tool in every gamer’s pocket. Simple and easy to use. You will view and save the FPS rating for the time being to evaluate later.

We mainly use Fraps for the FPS rating, but you’ll be able to screenshot and even record games on this.

It’s another CPU benchmarking tool. Instead of a simple interface, but works like a charm. CineBench will evaluate other components to or a combination of your CPU and GPU.

The tool tests explicitly all the cores of the CPU and gives a detailed output. So, if something is going on with your CPU, you will know it in an instant.

Get CineBench
5 Tools to Repair Corrupted Files on Windows 10

In the market, there are different benchmarking tools available. Some of them are free, and for some of them, you need to pay. Finding the right one that best suits you can be tough.

So, it’s better to try out the trials before you purchase a tool. But if you ask me I would recommend PCMark, and SiSoftware Sandra for a full fetched performance benchmarking. But if you only want to evaluate gaming performance then 3DMark is the best.